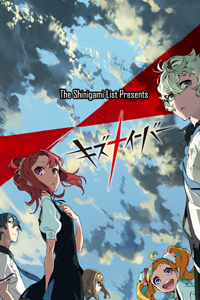 Kiznaiver (キズナイーバー) is a new original project by Trigger – the studio responsible for 2013’s hit TV series Kill la Kill and the popular magic anime series Little Witch Academia. The new show will be a fantasy world of young people with superhuman abilities. A new era has arrived, and it will be the Kiznaivers who will survive the change.

Learn all about it below.

We will meet with the citizens of Sugomori City, a fictional Japanese city built upon a reclaimed land. As the years go by, the population diminishes. The birth rate is low, the death rate higher than ever. What causes all this and can the hands of time be reversed for this world?

In aid comes the Kizna System. If you have ever wondered what it feels like to keep your friends close, but your enemies closer, then you can get a very clear idea of it from the show. The Kiznaivers, users and active units in the Kizna System, are people, normal citizens, linked to each other. The common denominator? They are as different as you can go.

The very system works like this: the wounds afflicted to a Kiznaiver are transmitted to the other members of his connection system. Then, if his links have their own links, the wounds get transmitted down the chain. The system is not complete.

Our main characters are Noriko Sonozaki, an ordinary student, and her classmate Katsuhira Agata, who find his fate to be more than extraordinary and shocking. When Noriko tells Katsuhira that he is a Kiznaiver, he has no other choice but to feel confused.

Katsuhira is a second year high school student who doesn’t like to express his emotions openly. He also suffers from a rare condition which doesn’t allow him to feel pain.

She is apathetic and another member of team Emotionless. She has a mysterious behaviour, and her actions and reactions seem to be quite odd to many of her classmates. On the other hand, she too seems quite stunned by the way people communicate around her.

She is Katsuhira’s childhood friend. She is a good pal, a caring companion for Katsuhira, especially when he’s experiencing difficulties. One of her bad sides is that she’s quite meddling.

He is an open-minded, energetic person with a silly side. Although lacking in brains, he is quite strong and always ready to enter into action.

A top student who is never late to compliment a lady. A heartbreaker, but also very self-conscious. He regards most men around him with disrespect or gives them the cold shoulder.

A lovely-looking girl with blunt attitude and sharp tongue. She is a lone wolf, but a strong one nonetheless. She hates sheep-like behaviour and prefers trusting only herself. She often says things many consider unladylike.

Nico is an innocent girl who cares about fashion. In fact, fashion is her life. While may consider her too silly, she is in fact quite helpful when it comes to looking from a different perspective.

A young man with unique looks. Yoshiharu sports a number of piercings and characteristic bandages as accessories.

Yamada-sensei is our protagonist’s homeroom teacher. A teacher in Chemistry, he is all about chaos and laziness. He is openly apathetic even when it comes to things such as his job and the class’s tuition.

This is the mysterious, robe-wearing high school counsellor. She is competent in her job, and ready to aid a student in need.

Sugomori City’s mascot. He appears at various locations hen there are events related to promoting the city’s activities and making policies more popular.

OP: “LAY YOUR HANDS ON ME” by BOOM BOOM SATELLITES

The first two episodes were streamed exclusively during the 27th March event at the United Cinema Toyosu.

Excluding this special screening, the show’s official airdates are as follows:

On Tokyo MX, every Saturday starting 9th April at 23:30

On GTV, every Saturday starting 9th April at 23:30

On Tochigi TV, every Saturday starting 9th April at 23:30

On ABC Asahi, every Saturday starting 9th April at 26:15

*all times are local; broadcast details are subject of change.