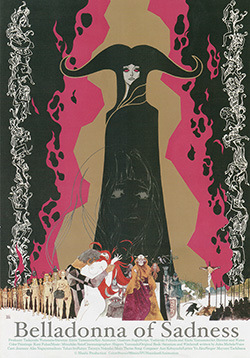 Kanashimi no Belladonna (The Tragic Belladonna) is a 1973 anime movie produced by Osamu Tezika’s company Mushi Productions and especially his animation team, led by director Eiichi Yamamoto. This project s considered an anime masterpiece. Cinelicious Pics will restore the film directly from the original 35mm negatives. Distribution in North America, especially the United States, will be theatrical, home video an on-demand.

This is the third and final movie in the Animerama trilogy (Senya Ichiya Monogatari a.k.a. 1001 Nights; Cleopatra). It is the only one of the three to not be directed by Tezuka. He also didn’t participate in the making of the movie as a whole.

The story of this adult movie focuses on a girl whose libido is awoken when, during her wedding night, she is abused by a demon. Because of this event, her husband rejects and denies her. This awoken sexuality of hers gives her witchcraft powers and abilities she has never even dreamt of.

Have you watched this adult-themed movie?

3 thoughts on “Kanashimi no Belladonna Movie Gets Remade, Released in NA Soon”