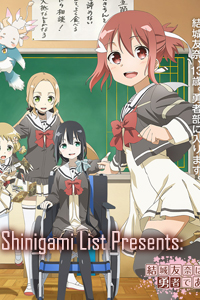 Yuna wa Yuusha de Aru is an original anime by Studio Gokumi. It will transfer us to the year 300 in the era of the gods when a certain “Hero Club” has to battle against the Vertex and keep the balance. Yuki Yuna is just one of the club members; all other have a lot to add to this story for sure.

We will be sent into the reality of Yuna, Mimori, Fu and Ituski. It is a reality of fantastic beasts, cute pets, immense adventures and a lot of fighting during their days in the Hero Club. While fantasy and reality entwine in the lives of these four girls, we are transferred into a world of magical superhuman girls and a bunch of charming creatures.

Yuna loves udon and is a remarkable martial artist. She is always positive and ready to help.

She is the best friend, neighbour and classmate of Yuna. Mimori is a calm and elegant person, and a good trustworthy friend.

Fuu is Istuki’s sister. She likes joking around, cooking and eating good food.

The sister of Fu and a quiet girl who works hard in both life and studies. She is often under her sister’s shadow, but when with friends, this Tarot and divination fanatic is a great company.