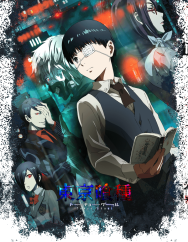 A sudden change in the winds for the fans of the ongoing Tokyo Ghoul anime TV series. The original manga by Sui Ishida, on which the anime is based, will end next month. The final chapter will come with the 18th September issue of the Young Jump magazine while the final volume 14 – on 17th October.

The series has been running since 2011 and has surely become a favourite of many. With its combination of romance, fantasy, tragedy and blood, it is one of the most complex manga series from the recent years.

If you have seen only the anime and think it can do with a bit more gore – read the manga. It will fulfill your requirements.

Tokyo Ghoul, as you probably know from the ongoing anime, focuses on the battles between Ghouls and Humans. The humans think the ghouls are ruining the world by feeding on them. On the other hand, ghouls cannot survive without human meat. While there are ghouls who try to eat only the meat of the already deceased, it means nothing to the humans who hunt them. Many ghouls who have not killed even once in their lives, have been mercilessly and brutally killed by the Doves – special squads of well-trained humans who hunt ghouls.

Who is ruining the world and who is trying to survive… You can read until 18th September when the last chapter will come. Nonetheless, rumour has it this is just the end of stage one of the story.

Will this make you want to read the manga more or less?